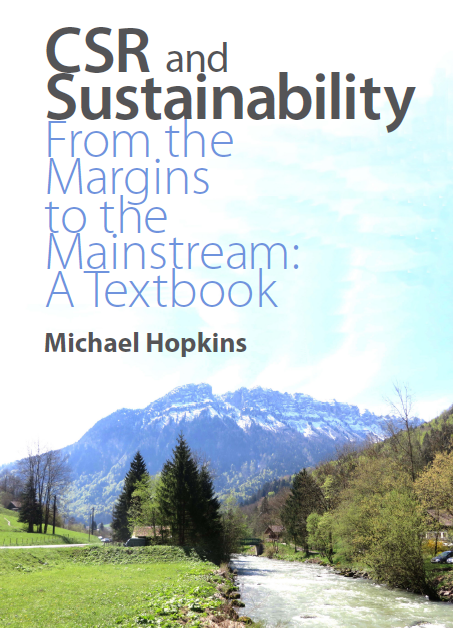 Do the tools of Social Responsibility have a role?

At first blush it would seem that concerns with social responsibility (SR) are very far from terrorist incidents such as we have seen committed, allegedly, by Al Shabaab in Somalia.  The immediate response is often more troops, more protection, more guns preceded by intense media coverage.  I know Westgate well and it pains me to see such wanton loss of life for a highly debatable motive.

The key stakeholders in the Westgate incident 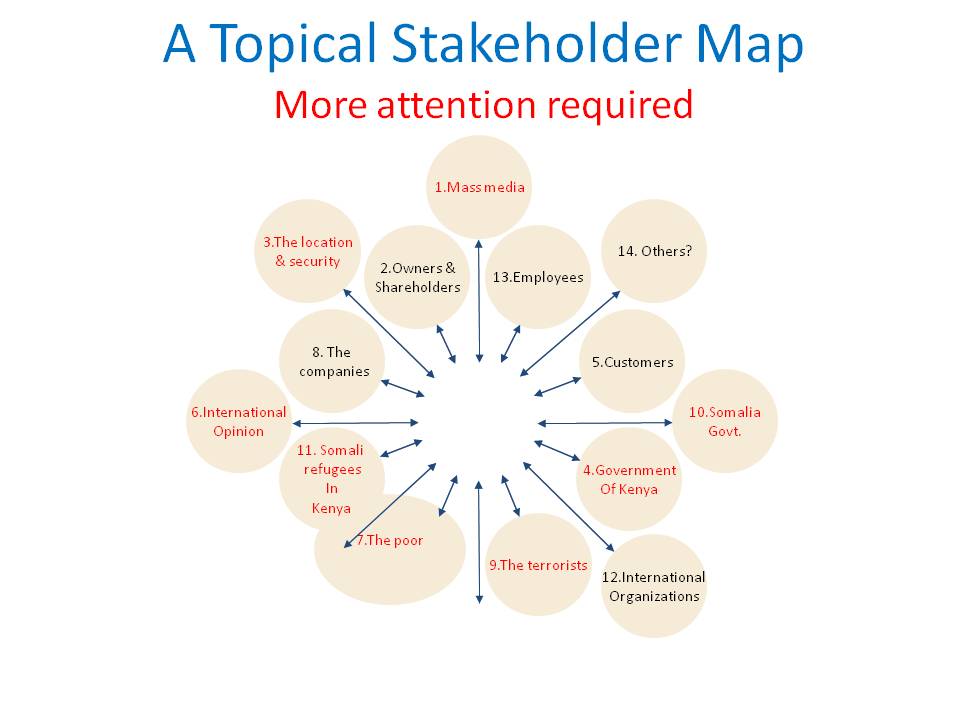 The first key stakeholder is the media (stakeholder No. 1 in the diagram).  Without blanket coverage of terrorist incidents terrorism would not have the audience it so frantically seeks.  I believe in a free press but also a responsible one – the media rarely shows horrific schemes and many countries have a code of practice for their press.  A socially responsible media would NOT report ongoing events and ONLY report once the incident is over.  Clearly, the problem with reporting ‘after the incident is over’ is that there is no longer anything to report. In reality, news reporting and public opinion of it are no more than a fashionable trend.  Once the event is over, the world moves on to the next ‘fashionable’ thing.  To illustrate, the media and society quickly stopped debating the situation of the use of chemical weapons in within two months and, today, Westgate is a mere footnote in much of the major media outlets.

As I started to write this piece, BBC, CNN, Al Jazeera, Tribune de Geneve, Kenyan Standard, Hiraan News etc were all broadcasting non-stop.  Why?  How does it help?  Did I learn anything?  No…  Further, it is clear that much of the broadcasting was false as events inside the Mall were totally confused and even the Government of Kenya, trying to show it was in control, failed.  Thus stakeholder number one was clearly used and they would argue that this is in the public interest.  Really?  Many will argued that society has the right to know.  People are not babies that need protected from the truth.  With the knowledge, people feel empowered.  Thus the media are simply providing the service to its audience.  Hence the media is not to blame.  Yet without media coverage there would most likely not have been a Westgate incident.

Next, going in order on the highlighted sections of the stakeholder map comes the location and security(No.3).  There are reports that the savages – let me call people who use AK47’s to kill children, pregnant women and innocent people in general not only terrorists but non Islamic savages since Islam rejects violent acts –  rented a location in the Mall from which to carry out their evil deeds.  Yet, inspections of vehicles were cursory or non-existent and only two people scanned pedestrians as they entered the Mall either in the front entrance or from the car park –one to scan me and one to scan women.  It is known that the savages attack in numbers to overwhelm defenses, such has been the case in two recent attacks in Mogadishu, Somalia – the UN compound, and the Turkish embassy.  Allowing entry on a one by one or two by two through bullet proof screens would prevent most attacks and the cost probably would not exceed $US100,000.00.  Clearly, and the result that all terrorists seek, is less freedom for the public but certainly would improve the safety and social responsibility of the location.

The Government (No.4), too, poorly prepared its police and army interventions, and reports are that they lacked adequate training (allowing some or even all of the savages to escape), and were un-coordinated.  There were also reports that they were shooting at each other and even that the collapse of the car park was created by heavy weapons used, sadly, by the Kenyan forces[2].  They had also received warnings of a potential attack but they no doubt receive hundreds of warnings and, as such, one can sympathise that they cannot take all seriously.

I had not initially included international opinion (stakeholder No. 6) in my original list of key stakeholders.  As it is becoming clear that Al Shabaab used foreigners in the attack and might even have been used by Al Qaeda to broaden their disgusting appeal, international opinion has led to international action.  The USA, UK, France, Turkey, EU, are now even more concerned about Al Shabaab in the Horn of Africa than they were before the attack.  The link to Al Qaeda, and politicians in Somalia use the phrase Al Shabaab-Al Qaeda in the same breath, has awoken fears of a resurgent Al Qaeda and one that has to be addressed again as a priority for the aforementioned countries.

The poor of Kenya (stakeholder 7) rarely, if ever, enter Westgate yet gather outside selling trinkets and may be lucky to obtain work inside.  There are several million poor people in Nairobi near to Westgate in areas such as Kiberia and Mathare while Eastleigh is home to many Somalis both naturalized as Kenyans and some refugees.  These latter have been stigmatized and homes raided on flimsy pretexts and sometimes are victims of money extortion.  As Kenya becomes steadily richer, more needs to be done to address the poor living conditions experienced in the settlements mentioned for humanitarian reasons as well as to reduce potential levels of crime.  The poor are mainly struggling to survive and are against terrorism as much as the next person.  99.9% of Somalis in Kenya have the same common enemy as all Kenyans, that of terrorism.

The terrorists (savages stakeholder 9)seem, according to reports, to be part of Al Qaeda with some, but not all Al Shabaab Somalis.  They were well organized and show they present a severe threat to innocent people.  Most, if not all, leaders are after power and money and influence their recruits through promise of money, religious education and a pathway to heaven.  The recruits are generally poorly educated and illiterate, unemployed and lost so the promise of a pathway out of their misery is attractive when advocated strongly by people they admire.  A vigorous campaign is required to educate these youths that the road to paradise includes being painfully blown to bits, coupled with a paid employment programme which will lead them to a better level of living.  More bombs and repression is simply likely to help the recruiters.

The Somalia Government (stakeholder 10) has only been in power for 12 months and continues to be rocked by violence from outside forces as well as being reliant on weak institutions.  Promises have been made by donors to the tune of $1.2billion, but this can only be used if the institutional framework meets the donor’s requirements and there are many weaknesses that need to be urgently addressed by the Somali Ministerial team.

The Somali refugees (stakeholder 11)are victims of unrest, poverty, famine in their own country and escape to neighbouring countries (mainly Kenya but also Yemen, Uganda, Ethiopia, South Africa, Djibouti and Eritrea..while some try and make it to Europe often with tragic consequences as instanced by the drowning of hundreds of refugees off the coast of Italy in recent times).  On arrival in camps they continue to be victims despite the best efforts of the international community such as UNHCR and its many donors (by the way the USA donates around $1bn a year to such initiatives).  Kenyan politicians have already branded, for instance, the huge 300,000 strong Dadaab camp on the border between Kenya and Somalia as a festering ground for terrorists.  This might be true for, say, 2 or 3 individuals but the 300,000 should not be victimized.

There are the other stakeholders in my diagram that I have not highlighted – yet the owners, companies and shareholders were subject to looting while some of the owners were of Israeli origin which might also have provoked the attack although I think that that was more of an afterthought rationalization. Other stakeholders are clearly the customers who include people from the many international organizations, the poor employees who were simply earning their livelihoods as well as many others.  I, myself, having returned to Nairobi am fearful and slightly nervous when I enter a Mall or crowded public place.  However, I shall not desist since that fear is exactly what the savages want so as to engender fear and respect, followed by a takeover in the world of their stone age views.  I shall not stop working to educate young people and to drive them forward to adopt peaceful means to improve the lives of many, as well as themselves.

Mistakes were made all along the path toward the Westgate tragedy.  We humans only seem to act after a tragedy and rarely beforehand.  To prevent another such tragedy the steps shown here need to be applied on a consistent and systematic basis.  The media encourages us to think in highly simplistic terms…such as get the number one terrorist leader and all will be well.  As I have attempted to show in this article any issue is a whole host of complex inter-twining events.  The media is crucial and must be independent but does it really need to show public tragedy and thereby encourage the perpetrators?  Its role must certainly be one of the aspects to ensure these outrages are minimized as much as is possible.

Yet, we readers and myself need to work hard to be more positive and humanitarian, focusing on the education of potential Al Shabbab recruits (Al Shabaab means ‘the youth’)as well as paid employment and better living standards, that are missing in the life of those recruited to become terrorists.  There is no doubt that more bombs and repression are simply likely to help the recruiters.  We need to be much cleverer than our savage opponents.

One may be seen as a dreamer if one is to believe that terrorism will completely be eradicated, but better education, employment and acceptable living conditions can certainly help to reduce it.

[1]Thanks to Ron Cambridge, London Metropolitan University for comments and suggestions on an earlier draft.