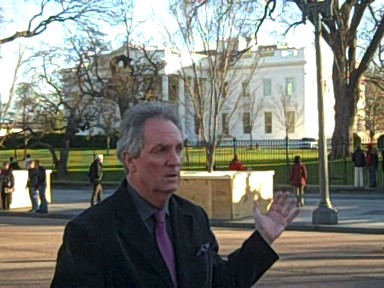 ‘CSR covers a multitude of issues,health and safety, labour rights, environmental protection, supply chain management, community relations to list just a few. Which issue is critical to you depends on what type of business you are in. But making use of the CSR toolbag isn’t a job just for specialists, or the preserve of big companies.’

[Prince Andrew, Duke of York and son of the British Queen, speech in Geneva at a Gala dinner, Nov 22 2004, attended by author]

1 CSR techniques can be applied to any institution

I thought it would be interesting to take a look at the corporate social responsibility of the British Royal Family. This article was prompted by a speech on CSR in Geneva that was given by Prince Andrew – the second son of Britain’s ruling monarch – and by my visit to the socially responsible institution of the USA photo above (And yes it is socially responsible since the occupant of the White House is elected ..well Trump has proved me wrong on that point!). Any institution can be considered ‘corporate’ such as NGOs, Governments, the Olympic movement even the World Cup Football tournament (see other Monthly Features on this) so why not consider an Institution that is doted upon by millions? Her Majesty the Queen apparently refers to the Windsor Family as ‘The Firm’ so the Royal Family’s CEO implies that the Royals can, indeed, be seen as a corporate body.

Let me take, as far as possible, an objective method of analysis. This consists of identifying the key stakeholders of an institution and judging whether they are being treated in a socially responsible manner.

So who are the stakeholders of the Royal Family? There are seven main ones:

· the employees of the Royals,

· the people of Britain and the Commonwealth,

Internal stakeholders – employees: On the Royal’s website (www.royal.gov.uk) there is no mention of a code of ethics nor a social report. My impression is that the employees are treated well, are generally well paid and all this translates into an organisation generally perceived as harmonious with the occasional blip contributed by money seeking former staff members. Nevertheless, it is surprising that there are few exposés by former employees (and none by existing employees) and those that do see the light of day tend, in general, to be complimentary. Especially when the general public, and not only in the UK, seem to be titillated by trivial exposure, such as the recent article by the London Evening Standard which highlighted the fact that the Queen was wearing pink slippers as she tried on her crown before heading off to the State opening of Parliament! On the other hand, transparency of the Royals is not generally available, although this might best be explained by security and the Royals do pay taxes and have, these days, to make a tax declaration.

Internal – extended family members: the Royals have an history of charitable involvement (although see what I think of charity, in general, in www.mhcinternational.com) so score well here. But not all Royals work as hard as a well known few – the late Queen Mother was famously known for giving preference to horse racing over Royal functions.

External – people of Britain and the Commonwealth:

Opinion polls of the British people generally approve of the Royal Family. However, if the Queen retires, less than half (47%) of British adults would want to keep the monarchy as it is, according to a survey conducted by MORI in mid 2004. The survey – for The Marylebone Charitable Trust (the campaign for an elected head of state for Britain) – showed a third (35%) favour a scaled down monarchy, and 17% an elected head of state. One per cent say no to all these options.

The Commonwealth is an anachronism left over from the days when two-thirds of the globe was covered with pink – even as recently as when I went to school in the 1950s. Independence of Britain’s colonies has changed the colour of the map and the make up of the world – to the better when one reflects that former colonies now rule themselves. But any institution where countries get together and freely exchange ideas is welcome in these times of suspicion and conflict. So both people and Commonwealth get, just, a positive mark up to this point.

The real problem is the perpetuation of the class system where contact with the Royals leads to privilege simply because of this contact. So fewer marks on social responsibility here.

External – armed forces: The Royals are traditionally head of the armed forces, the ruler is regularly saluted by the armed forces and the national anthem played in honour of the ruler at every occasion. Most certainly all these trappings are excellent for morale and cohesiveness when the young men are asked for loyalty and personal sacrifice. So good marks for the Royals here but, yet again, privilege is rife in the armed forces – just listen to the mainly cut glass accents of the officers compared with the lower ranks. But the British army is known for its excellence and professionalism so little to criticise here and it is the UK Government and not the Queen who sends soldiers into action.

External – the Government: There is not much the Royals can do that is not dictated by the Government. The Queen’s speech at the opening of Parliament is written by the Government of the day. This is all well and good since the Government is elected and is meant, therefore, to represent the view of the people. On the other hand, the Prime Minister regularly visits the Palace to brief the ruler on issues of the day. Why? Who elected the ruler? What influence do these meetings have? No record of the discussion has ever been recorded and is not available for public inspection. So poor CSR marks here.

External – the environment: The Royal Family has always had a very pro-environmental approach and Prince Charles is very active in organic farming and organic produce. It is an area that used to be slightly less controversial than social or economic policy – outrage quickly follows any Royal statement on either of these latter two items. Of course, one needs a good environment for the hunting and shooting activities that Royals engage in. Benefiting from huge land holdings and castles dotted around the UK, the Royals can be said to preserve in pristine condition at least some parts of the UK. On the international stage, too, the Royals and Prince Charles in particular, are vocal against global warming and probably do have a positive impact on people’s thinking around the world on the dangers of not taking the issue seriously. So generally good marks here.

When running a short social audit of the Royal Family through our online questionnaire, CRITICS (Corporate Responsibility Index Through Internet Consultation of Stakeholders – see ‘rate your company’), I found they scored 55% – better than the United Nations at 50% and similar to the current US Government also at 55% – but worse than companies such as Shell, BP and IBM who all scored well in excess of 80%. The main difference being the lack of a code of ethics distributed to all within the Royal Family and the lack of a social report.

The CSR analytical approach taken shows both its advantages – a rapid assessment – and its weakness. Because the CRITICS questionnaire takes each question with an equal weight the response to the question ‘is the Royal Family socially responsible’ gives a weak yes! So the question is how much weight should be given to each of the responses?

The dominant position of the Royal Family in preserving the class system whereby those at the top continue to prosper while those down the ladder remain more or less where they are, is a crucial concern and should be given a much higher weighting than such questions of whether the Royal Family has a code of ethics or not. Depending on how important the class system and the bestowing of privilege is, will affect the result of our CSR enquiry. There is no doubt that Britain today is one of the richest countries in the world with high levels of social standards as typified by almost full employment. Would, therefore, the absence of a Royal Family create less stability and lead to a lower standard of living for the British people? Or would, its absence lead to higher levels of living? There is no easy answer to this question.

One consideration is whether a modern State should grant privilege and power to a select few based upon birth? In the private corporate world the practice of passing on the reins of power from father to son is frowned upon. A corporation would have serious questions to answer to its shareholders if it did so. Similarly, the British Royal Family should also think about its corporate power and passing on its heritage to the best person available. Particularly if it also seriously consulted its stakeholders – that would be socially responsible!

But, returning to the question raised at the head of this Monthly Feature about whether the Royal Family is Socially Responsible or not. We have reached the conclusion that the UK Royal Family is socially responsible, showing an extended version of the noblesse oblige – the responsibility of the nobility – which puts them in a very favourable light when compared with other heads of state.

Returning to the quote from Prince Andrew, the Royal Family could extend its use of the CSR toolbag he mentions within its own household even further and use its position to promote the real good that CSR can bring. The audience for an inspirational and (right) royal CSR message – the millions of people who are fascinated by the pomp and prestige of their status – is huge. They only have to do more of what they are already doing in the CSR field and the UK Royal Family will make themselves an aspirational model that has nothing to do with wealth and outmoded prestige. This Firm could be a major force for good!

[thanks for comments to Ivor Hopkins]
Menu