CSR AND DEVELOPMENT PART II: THE FORTUNE TO BE GAINED BY CSR 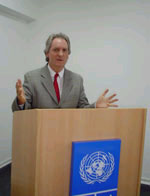 ‘Business is the key to beating global poverty, but we’re talking so much more than handouts’ [Simon Caulkin , business journalist, The Observer, March 13, 2005]

MHC International Ltd (MHCi) is looking at the role of CSR in the social and economic development of developing countries. This, the second part of a four part article, is based upon the author’s forthcoming book on the subject. The first part can be read from our website Corporate Social Responsibility and Development Part I where we looked at Prahalad’s celebrated work on business and development in the Fortune at the Bottom of the Pyramid. Briefly, I found his ideas wanting because of the lack of attention to all stakeholders (particularly the demand side stakeholders). Below, I explore whether the notion of CSR could be a better concept with which to engage corporations in economic development.

1. Governments and UN have failed

My main proposition is that Governments and their international wings, the international agencies grouped under the umbrella of the United Nations, have failed in their attempts to rid the planet of under-development and poverty. After half a century and $1 trillion (one thousand billion) in development aid, more than 2 billion people still live on less than $2 a day. Indeed, some of the poorest economies are going backwards!.

The failure of Governments has been exemplified by the fact that pop stars now appear to command more attention than Governments in highlighting the need to reduce poverty. But, Live Aid ten years ago didn’t work so why should it now? The simple answer is that aid in terms of grants is rarely successful.

The obvious inference is that, as development has to take place, the private sector must now shoulder much of the burden. Large corporations, with their power and economic strength, have now been given almost carte blanche by Governments to expand and invest. One part of that bargain must be that the large corporations have to take much more responsibility for development than ever before.

2. CSR provides a glimmer of hope

There is a glimmer of hope as the adoption of CSR shows that the large corporations have accepted that they cannot ignore their social responsibilities.

Although much of this interest to date has been in philanthropy (charitable giving) rather than translating CSR into social development per se. Development projects are much more complicated than charitable donations that hand over cash directly for a school or hospital however welcome these seem to be. Development means working with local partners as well as the public institutions to create sustainable projects. Much of development, and probably the most effective albeit unsung, is purely creating capacity i.e. creating and upgrading skills since the best development projects are those which help people to help themselves.

Clearly, corporations are not experts in ‘development’ and tend to make many of the mistakes that were made in the post-Second World War crusade against under-development by aid agencies. Stories are legion of companies providing direct grants to projects that are unsustainable or simply allow host Governments to feather the nests of the most corrupt among them .

1. Companies should abandon all philanthropy which is outside of a CSR framework.

2. Companies should work hand-in-hand with Governments to promote economic and social development.

3. Why corporations and development?

The key issue for corporations is why should they be interested in development? A sub-issue is, if development is so important for companies, then why go the CSR route?

There are at least nine benefits from CSR that will both improve a company’s’ bottom line and help to resolve the problem of under-development and poverty:

1. Reputation is improved since it is built around intangibles such as trust, reliability, quality, consistency, credibility, relationships and transparency, and tangibles such as investment in people, diversity and the environment.

2. Access to finance is greatly improved as socially responsible investment (SRI) becomes more and more important. The creation of new financial indexes is also supporting these trends: for example FTSE4Good and the Dow Jones Sustainability Index (DJSI) are publicly ranking the major international companies according to their environmental and social performance.

3. CSR is an important factor for employee motivation and attracting, motivating and retaining top quality employees.

4. Innovation, creativity, intellectual capital and learning are helped by a positive CSR strategy. Given that 80% of the value of many new economy companies is now their intellectual capital its preservation through the positive treatment of internal stakeholders is becoming more and more necessary.

5. Better risk management can be achieved by in-depth analysis of relations with external stakeholders. Factors such as new technologies, changing societal, regulatory and market expectations, drive companies to take a broader perspective when analyzing the range of risks they may encounter.

6. CSR positively helps in the building of relationships with host governments, communities and other stakeholders and can be of vital importance should the company encounter future difficulties with regard to its investment decisions. CSR gives a company a ‘competitive’ advantage over companies with poorer images.

7. Greater Corporate Social Responsibility is linked to the heightened public debate on the benefits and shortcomings of globalisation and the perceived role of business in this process. Those companies perceived to be socially responsible are, more and more, those companies of consumer choice.

8. The energy, technology and management skills learned and honed in large companies are increasingly being made available for the management of poverty alleviation through such instruments as the UN’s Global Compact, Business in the Community, private and public partnerships etc.

9. There is a growing consensus of a Planetary Bargain whereby beggar-thy-neighbour policies of companies through using the cheapest labour, the most polluting industries etc. are neither in the interests of the companies concerned nor of their consumers.

Of course, there are costs and limitations to the CSR approach, and the idealisms behind the approach can also hinder its spread as hard-nosed businessmen try and squeeze every ounce out of cost cutting and profit maximization. But, as the classic study Built to Last has shown, CSR companies perform better for shareholders in financial and market terms, carry less debt, and are long stayers.

So, can CSR pave the way for development and also make an honest profit for companies? The short answer is yes. CSR has paved the way for corporations to examine their wider role in society in ways that have never been done before. CSR is a systems concept that touches every part of a company and has both positive and negative effects. The wide role of CSR, coupled with the power and technological capacity of corporations and fuelled by the failure of most development efforts to date, provides additional impetus for corporations, and the private sector itself, to be more involved in development than ever before.

Clearly, Governments will be the overall arbiter of development through the public purse. But their failure in many developing countries has provided an empty space that must be filled by another entity, and the only one around is the private sector and its champions, the large corporations. It is relatively easy to argue the obverse that corporations should stick to making profits and leave development for Governments, but this is a dance to the death, since the market left purely to profit maximisation has been unable to fulfil social roles such as reducing unemployment, creating primary and secondary education for all, tackling the major diseases of the Third World and so on.

Only time will tell whether corporations will take on this new challenge. To a certain extent MNEs will engage in development simply to ward off problems such as rising energy prices, resentment at off-shoring, consumer boycotts and the like. Whether or not they will take on the wider challenge of development, and how they will do this if they decide to go forward, are still subjects of intense discussion. And what they should do in the development arena is also not clear – something that I shall discuss in Part III of this series of Monthly Features. The UN has been promoting both its Global Compact and, along with the World Bank, business involvement in meeting the Millennium Development Goals and will be examined in Part IV of this series.

[Contributed by Michael Hopkins with comments by Ivor Hopkins]