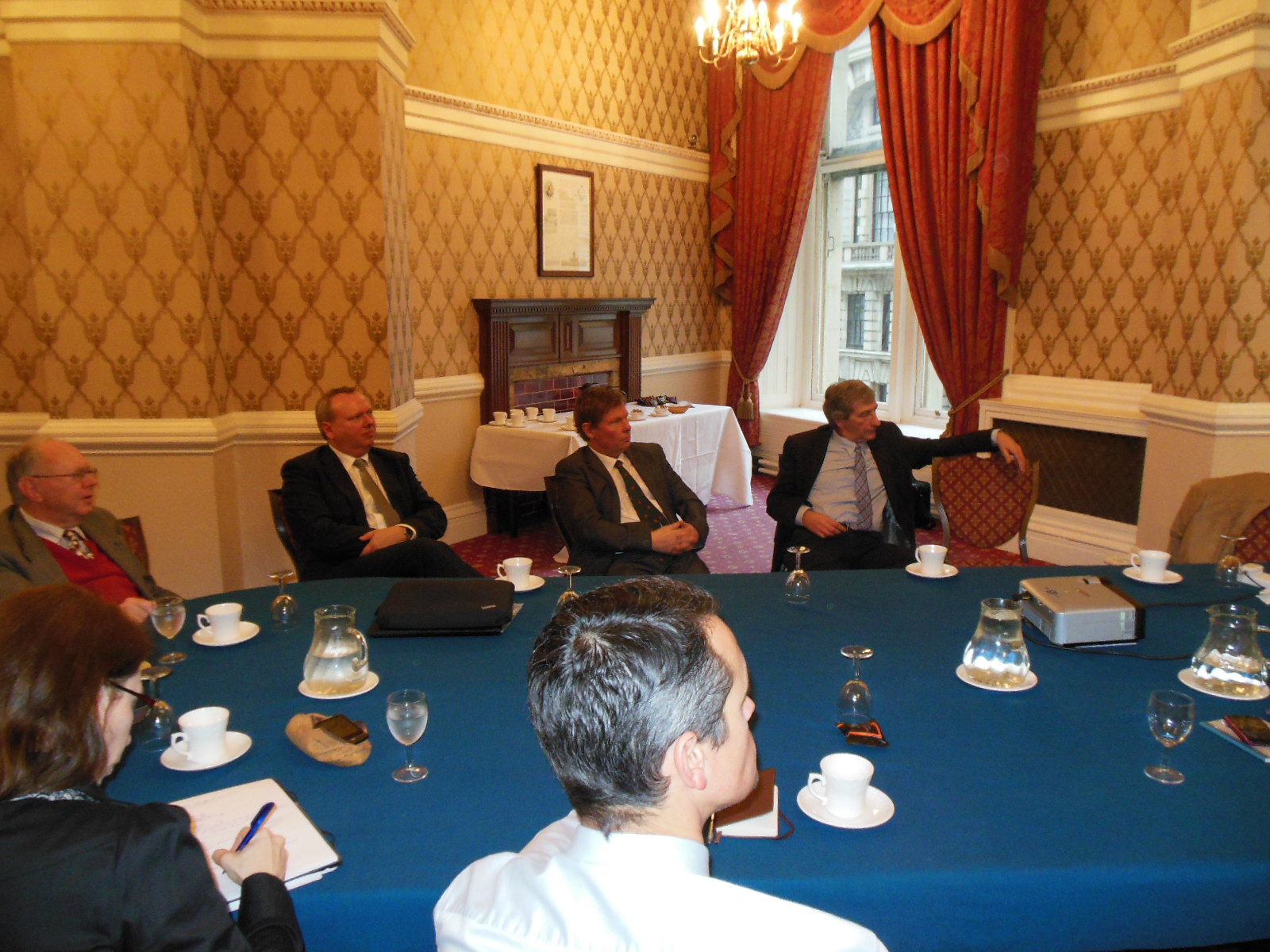 MHC International Ltd’s (MHCi) sixth annual update took place in Central London with invited experts drawn from the business, academic and NGO world.  This beginning of the year, invitation only event is designed to keep MHCi’s work on the cutting edge of CSR and Sustainability issues to ensure that our research, advisory services and executive programmes are as up-to-date as possible.

This year’s sixth MHCi annual CSR & Sustainability Update expert group meeting, with a range of CSR practitioners and commentators, once again looked at the prospects for CSR in the coming year in the context of changing trends and themes in the corporate, social, political and economic spheres.  MHCi uses these face-to-face intense discussions for its advisory services to companies and governments, and as an input into its executive programmes[2].

The Table above shows the two author’s assessment of our ‘predictions’ on a scale of 1 to 10, with 10 meaning totally accurate and 1 totally inaccurate.  The main conclusion is that we were not far from what happened with a minor surprise being that trust did decline for companies e.g. Apple, but not their brands and products e.g. i-phones.  A bigger surprise appears to be the rise of CSR as an oft-quoted term and a focus more on a comprehensive multi-stakeholder approach focusing upon social, financial and economic issues than environment and climate change.  In fact its popularity led some (Pamela Ravaiso in particular) to see CSR being ‘watered down’.  For instance if everything and anything is termed as ‘CSR’ such as the implementation of new machinery needed to keep up productivity is then termed CSR because a side effect is using less energy, then this is stretching the concept somewhat.  Or a company declaring staff evaluations as CSR when in fact they are required by most EU law, or even a company claiming that non-paid (graduate level) interns are part of their ‘community development’.

Some (Mallen Baker in particular in a written comment) noted that all the points on the rating slide were progressive shifts. They don’t happen over night and are hence easy to guess with relative accuracy over the upcoming 12, or even 24 months.  He challenged us to think about more sudden shifts, which could not possibly foreseen as easily – written about in Nicholas Taleb’s book on Black Swans.  In a political context, the Arab Spring could be such an example.

He noted that the most important and enduring changes often come about by more significant step changes, the causes of which are all familiar but the outcomes of which people never rank highly enough as a priority until after the event.  For instance, we knew that the financial system was under increasing stress for a number of years but we still managed to be surprised when the outcome came – and more importantly we only seem to react when catastrophe strikes.

Mallen continued that we have a number of growing stress factors around us at the moment, and logically we will see change that is not purely incremental as a result. We may not be able to predict with accuracy specific consequences, but we should be able to consider what are potential change points, and how might they be influenced.  So, for instance, more extreme climate events that shock people into greater urgency.  At what point might that lead business actors to get more actively engaged in the current polarisation of US politics on climate issues – and what would be the positive and negative outcomes of that?   Because surely the growing evidence of damage worldwide and the current US policy paralysis is one of those stress points where something has to give.  It doesn’t, of course, have to give in the useful, constructive way that we would like.  As a species, it is perfectly possible we go over the edge into the abyss pointing fingers and blaming each other all the way to extinction.  But the purpose of looking ahead and making predictions must surely be to make us more prepared to seek the outcomes that are more desirable, and to avoid the worst effects of those that are not.

[1] A black swan is an event, positive or negative, that is deemed improbable yet causes massive consequences, see Nicholas Taleb ‘The Black Swan’ [Random House, 2010)

Trust in companies may stabilise while trust in brands will continue to remain relatively stable. In this regard, the mainstream media was very willing to slate companies for bad behaviour, but rarely did it praise companies for good behaviour. Part of the reason for this was maybe that good news on the sustainability front (i.e. lower carbon emissions) was much more nuanced than child labour in factories and seen as a lot less emotive.

Trust in politicians will continue to evaporate – for example, in the UK, few of the electorate think MPs represent their interest as opposed to blindly supporting party politics. Some thought that this was due to MPs being paid too little (UK), others drew a contrast to the situation in other countries (e.g. Switzerland) where civic duty seemed to come first.  In the USA trust in congress has neared rock-bottom and is likely to stay that way for some time to come.

The issue of trust will continue to spark a lot of discussion around banks, and our take on this was where do you draw the line between everyday competitive business practices and illegal behaviour.  Rather than directly criticise banks, would be better to lobby Governments to make the rules clear. Same as for tax since there is a fine balance between progressive taxation where the rich pay a little more and punitive taxes that destroy enterprise – we saw the cover of the latest Private Eye, on which Santa is lambasted for being a tax exile!  President Hollande in France has certainly gone too far with 75% marginal taxes on the rich with rigidities in the labour market un-examined.

CSR will continue to evolve although not necessarily in a structured way. Some opinion formers had moved the argument on from ‘Sustainable Capitalism’ to ‘Breakthrough Capitalism’ or even ‘Conscious Capitalism’.  However it wasn’t immediately clear whateither would actually mean in practice.

Social Media may well end up being a ‘two-edged sword’.  Clearly this communication channel was becoming increasingly important (as was predicted last year), but companies CSR credentials could be enhanced or degraded at a whim. A key question here was how could companies best gear themselves up to make use of social media themselves.  Our group was divided on this and not on age grounds!

Companies will not cut back in CSR activities despite the current recession and times of austerity simply because companies now see CSR as a strategic business model essential for their business.  However it might mean that there would be cutbacks in funding for Green Issues as the seriousness of this issue had (in the public eye at least) diminished over recent years. Not helped by the relative lack of progress at Rio + 20.  On the other hand it was suggested that investing in Green issues could be a key focus for pulling countries out of recession.

The current wave of austerity, job loss and social unrest could stimulate Companies to consider changing their business models to adapt not only to changing social expectations of companies (e.g. executive pay and benefits) but also a leaner money supply.  Companies are likely to play a more pro-active role in pulling countries out of recession – transformative CSR as it were.  In the US, businesses may step in to solve the current intransigence (policy vacuum) on budget issues as without some agreement it was very difficult for companies to plan their investment programmes.

Although still at a slow burn, there was evidence that more women were assuming positions of power, not only in companies, but also in politics.

Taxation of big companies will continue to be an issue as even big national companies (e.g. Whitbread’s Costa) are facing an unfair tax situation in so far as multinationals have the footprint that enables them to pay far less tax than Whitbread. And ‘tax minimalists’, for want of a better phrase, are getting it in the neck in part because governments desperately need the tax revenue, not so much to bail out banks but to prop up wholly unsustainable public sectors.

Certification/’fair trade’ and ‘organic’ will continue but are starting to be confused/blended with other criteria such as food miles – a fairly hopeless approach given the CO2 footprint of greenhouses needed to produce ‘local food’.  SA8000 certification of Pakistan and Bangladesh companies that then burned down with the loss of many lives will continue the re-think process.

Ecosystem services will continue to establish as a robust and popular concept in NGO and scientific circles, partly because it is a good way to think about the benefits of the environment.  However, making them mainstream will make the CSR community having to convince the public to get used to the idea that they should pay for such services.

Finally, CSR in business will continue to mean much more than simply moral sustainability whereby moral sustainability is basically ‘you leave the world in a better state than you found it’. Companies are more and more convinced that the path to profit can embrace social and environmental development linked to product innovation. One would hope that this corporate aspiration will be taken on board by Governments and NGOs in terms of a more objective assessment by these sectors of the potential value of partnerships to accelerate and bring about real change in the business environment to the benefit of all stakeholders.